Selaine Saxby MP must back calls for Dominic Cummings to go, and put the fight against coronavirus first. 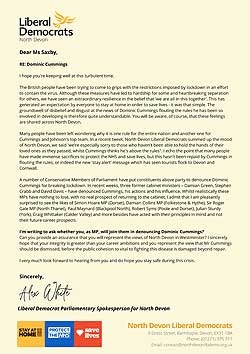 The Liberal Democrats have written to the Conservative MP for North Devon urging them to end the distractions and support calls for scandal-hit Dominic Cummings to go, so the country can focus on the coronavirus emergency.

The call comes alongside Liberal Democrat demands for an independent inquiry into the Government’s handling of the coronavirus crisis, while several Conservative MPs have also broken cover to call for Dominic Cummings to quit, amid claims he broke coronavirus lockdown rules twice.

“People right across North Devon have made incredible sacrifices to stop the coronavirus. Even if the Prime Minister keeps his blinkers on, the Tory MP here cannot be oblivious to
how angry people are with this scandal.

“Each minute this scandal is allowed to drag on is another minute the Government is distracted from upscaling Britain’s testing capacity, securing PPE for frontline workers and preventing the tragic deaths in our care homes.

"The MP must come out and put the health, wellbeing and economy of our country before efforts to save the Prime Minister’s adviser.”

“By failing to act, the Prime Minister undermines his own authority to lead the country through this appalling crisis, bringing his own judgement into question.

“The Prime Minister must come clean about what he knows and terminate Dominic Cummings’ contract. It is now clearer than ever that, once we are through this crisis, there must also be an independent inquiry to review the Government’s actions."

North Devon MP tells tourists 'there is plenty of space'

On Tuesday 12th May, the Conservative MP for North Devon claimed in a Facebook post that there was 'plenty of space' in North Devon. Today, Wednesday (20th) May, tourists flocked to North Devon beaches.

This week the MP has come under fire on her own Facebook live, accused of encouraging visitors over the last ten days. It follows images across social media, local and national press of cars queuing to gain entry into beaches.

Dozens of locals, along with us at North Devon Liberal Democrats, warned the MP that this was coming and encouraged her to put out a clearer message.

On May 12th, North Devon Liberal Democrats wrote to the MP and relevant ministers seeking for a clearer message, forewarning of an influx, and pushing for a clear 'come back later' message. These requests were ignored.

In the Conservative MP's own survey of over 1,100 people during the w/c 4th May, only 6.7% of North Devonians said they would welcome tourists back to the area. This is feedback that the MP ignored, choosing instead to be the voice of her Conservative government from Westminster in North Devon and not North Devon's voice in Westminster.

As a result, immense pressure has been put on the police force; council staff are run off their feet and our vulnerable hospital has been open to the potential for more cases. All of this could have been avoided. North Devon has been put at risk because of her failure to stand up for North Devon, and the Government's lack of understanding of areas like ours. In this MP, North Devon had no voice.

On Wednesday 13th May, the Conservative MP for North Devon voted against an amendment to protect the interests of farmers in North Devon.

The most important piece of farming legislation to come before parliament in decades included an amendment which sought to protect UK farmers from low-standard food imports. The amendment also sought to prevent a future trade deal from allowing food into the UK not produced to the standards required of UK Farmers.

Ms Saxby voted against change in the bill which would have guaranteed a ban on US chlorinated chicken and hormone-fed beef.

NFU President Minette Batters described the bill as 'one of the most significant pieces of legislation for farmers in England for over 70 years'. Clearly, the Conservative MP for North Devon disagrees with this expert.

Brexit requires the UK to have a new agricultural policy, and this will be defined in large part by the Agriculture Bill. Whilst many figures including the NFU seeing this as an opportunity to be leaders on the global stage; some MPs evidently see the bill as a race to the bottom. It's a move that worries the National Farmers Union, British Veterinary Association and 25 other groups, including the RSPCA; Wildlife Trust; WWF and more. 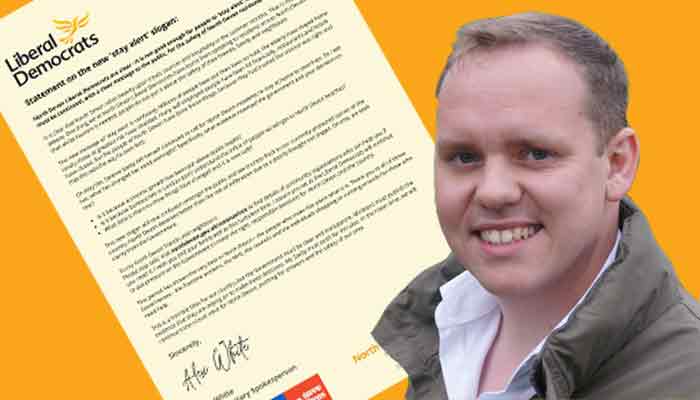 North Devon Liberal Democrats are clear - it is not good enough for people to 'stay alert'. Lockdown measures must be continued, with a clear message to the public, for the safety of North Devon residents and the country.

It is clear that North Devon relies heavily upon travel, tourism and hospitality in the summer months. That is not up for debate. One thing we at North Devon Liberal Democrats have learnt from speaking to residents across North Devon is that whilst tourism is needed, people do not put it above the safety of their friends, family and neighbours.

This new message of 'stay alert' is confusing. Millions of people have put their lives on hold, the elderly have stayed home lonely, those at greatest risk have shielded, many self employed people have been hit financially, restaurants and hotels have closed. But the people of North Devon have done those things, because they had trusted the science was right and that this was the way to save lives. 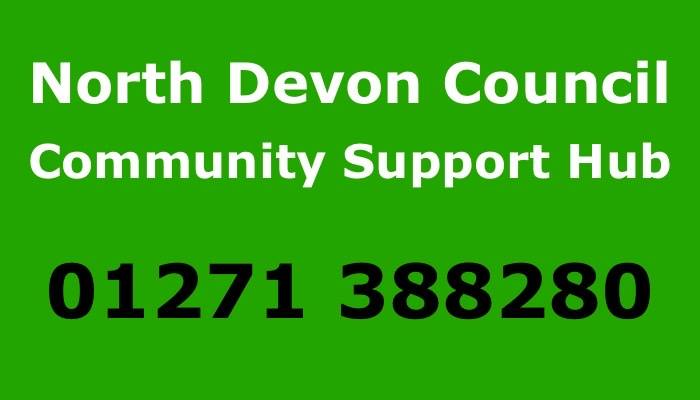 North Devon Council is operating a Covid-19 Hotline as part of their Community Support Hub.

For further information and to access support please visit the Council's Coronavirus pages.

Our old support number 07900 852841 is now being used by One South Molton, so if you live in that area please continue to use this if needed. 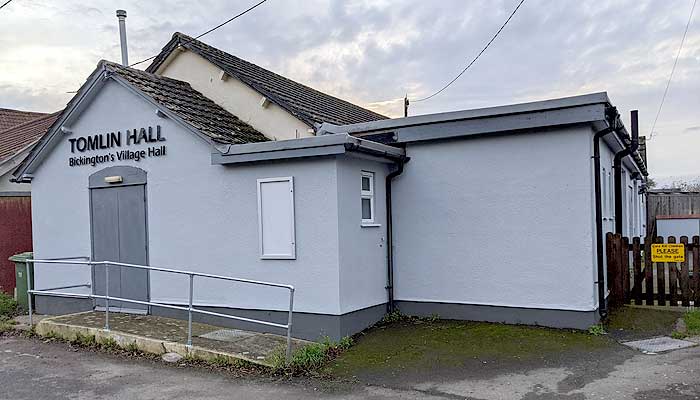 "£20,450 in S106 funding from developers has been allocated to the project to renovate Tomlin Hall, following a survey by Fremington Parish Council, which identified the facilities in the hall as being in need of modernisation.

The funding, from the Woolmers Farm development, will be used to improve the kitchen area and provide new plumbing and heating in the hall.

As Bickington's district councillors, we are all delighted to see Tomlin Hall receiving the funding it needs and deserves. Bickington is already a great place to live, and improving Tomlin Hall, to provide a shared community meeting space, will only make it better." 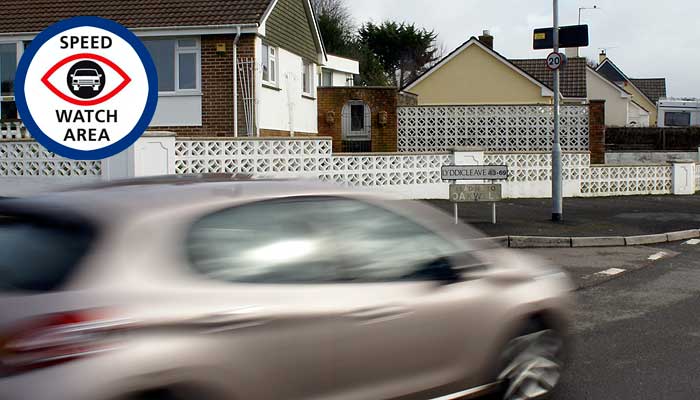 With traffic through Bickington in the mornings often at a stand-still, drivers resort to using roads like Lyddicleave and Ellerslie Road as rat runs, speeding along the residential streets.

It's time that stopped, so as district councillors we have secured a commitment from Devon and Cornwall Police to provide community Speed Watch training for residents.

The training qualifies anyone taking part to operate speed monitoring equipment and then use it to gather evidence to stop speeding drivers in their tracks.

The training takes a few hours to complete, and could make a huge contribution to make our roads safer.

If you'd like to take part in the scheme, please get in touch: 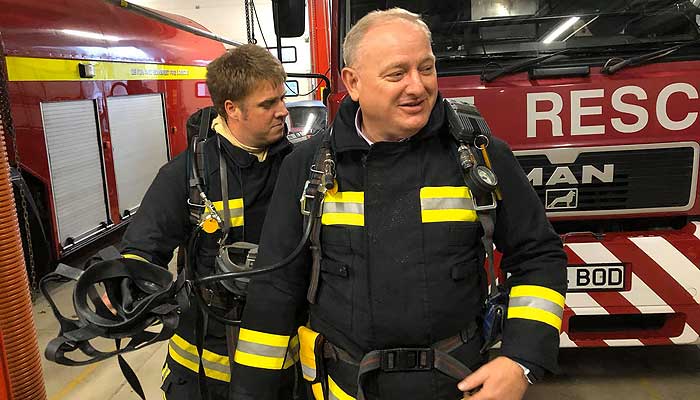 "Our local fire crews in Barnstaple play a vial role in not only reacting to fires but many other incidents.

I am so glad that after all the lobbying in late 2019 and early 2020 that we will have Barnstaple station manned day and night.

I was very privileged to be shown around and to take part in a training session.

I will continue to monitor the situation.

This has been a disappointing result for the Liberal Democrats. The agreement between the Brexit Party and Conservatives made this a difficult night for the party.

Nationally this became the Brexit election.

But locally, we can hold our heads high knowing we ran a positive campaign offering the people of North Devon the fair deal they deserve. We thank our immense number of new members, first time Liberal Democrat voters and dedicated campaign team.

It is clear that the North Devon Conservatives have clung on to a National message to ‘Get Brexit Done’. We know that it won’t be long before people look much closer to home in unveiling the deep inequality in this country and indeed in North Devon.

North Devon NHS must see the funding it needs 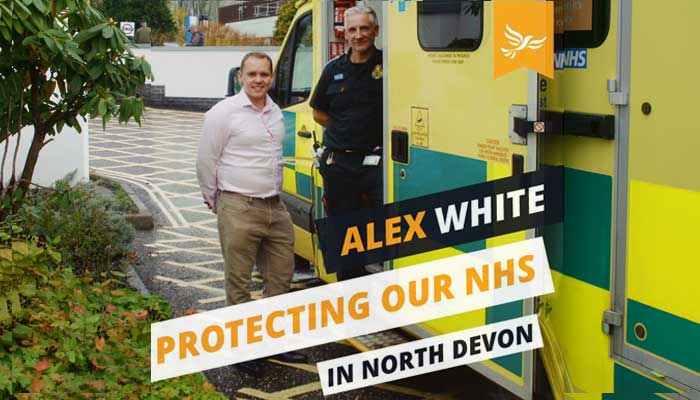 “A situation where the most vulnerable and fragile patients have to wait almost a day to be admitted is not acceptable. It’s about time our NHS was funded properly,” says Liberal Democrat parliamentary candidate for North Devon, Alex White.

The Lib Dems are the only party with a sensible and realistic plan to invest in the NHS, particularly front-line staffing and mental health services, by raising £6bn through just 1% increase to income tax.

Show your support for the North Devon Liberal Democrats with a Lib Dem poster.