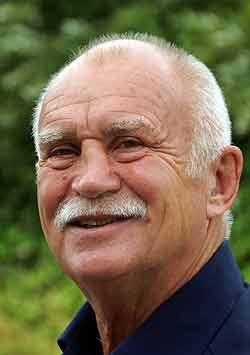 Malcolm was born in Ilfracombe and moved to Woolacombe some 45 years ago. It has been his great pleasure to serve the people who live in this wonderful ward of Mortehoe, Woolacombe and West Down on North Devon Council for more than 20 years and as a Parish Councillor for in excess of 30.

Malcolm considerers we desperately need affordable housing in our coastal villages to help our young families stay in the areas in which they were born and combat the increase in second/holiday homes.

He is the North Devon Council representative on the Local Government Association Coastal Issues Special Interest Group and a member of the Bathing Water Quality sub-group. North Devon has two of the seven beaches in England that received a “poor” rating in 2019 in North Devon - Combe Martin and Ilfracombe Wildersmouth. Apart from his obvious environmental concerns there are major worries about the effect on tourism and this is something that clearly needs addressing.

He states his main focus is to serve the people that elected him.  It has never been his policy to deride the efforts of other political parties and really hope that we can all work together to make this ward an even better place to live.