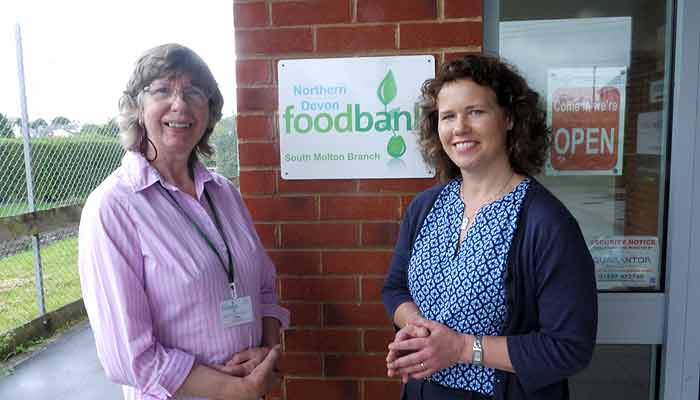 Families in Devon are struggling to put food on the table because of the Government’s flagship reforms of the benefits system, Kirsten Johnson, Liberal Democrat Parliamentary Spokesperson for North Devon, told a parliamentary panel broadcast on ITV West Country.

Set up to provide short-term help to local residents facing temporary financial problems, food banks are increasingly reporting that users are permanently depending on them because the total amount of their benefits has been cut when they are moved on to Universal Credit.

“The way in which it has been implemented is horrendous and people across North Devon are really suffering.” Kirsten told the ITV panel.

Having visited food banks in North Devon, she said had found that regular users were ‘hard-working people who cannot make ends meet because they are not being paid enough’.

At a visit to South Molton Food Bank, managed by the Trussell Trust, Kirsten was told that the Trust has seen a four-fold increase in the number of emergency food packs it supplied over the five years to March 2018. In 2017-18, the Trust supplied more than 1.3 million three-day emergency food supply packs, including nearly half a million given to children.

More than 124,000 people in the West Country receive Universal Credit, which rolls together six benefits including unemployment benefit, tax credits and housing benefits into one monthly payment designed to help people back into work.

“However, in North Devon, where the average wage is at least £3,000 less than the national average, yet house prices and rents are significantly above national rates, working families face particular problems”, she said.

Meanwhile, the current Conservative MP for North Devon voted in Parliament to freeze the rate of many working-age benefits and to reduce the household benefit cap.

Kirsten told the ITV panel: “People are struggling in work and universal credit is not working for them.”

She added: “When claimants approach their district or the county council for assistance, they are told that benefit budgets have been cut by the Department for Work and Pensions. Claimants are then referred to charities, which do not have the resources or personnel to provide help.”

In South Molton, Kirsten spoke to a charity worker who said some were not able to claim universal credit because they had neither computer skills nor access to a computer necessary to get on to UC’s digital platform.

Kirsten said: “Rather than telling people they have to reapply to move from the old benefits to universal benefits, as the Conservatives have suggested, the Lib Dems believe we should automatically put claimants on universal benefit and take that part of the process out of the system, so there isn’t a gap in payments.”

Kirsten was joined on the ITV West Country panel by Karin Smyth, Labour MP for Bristol South, and Conservative MP for The Cotswolds, Sir Geoffrey Clifton-Brown.