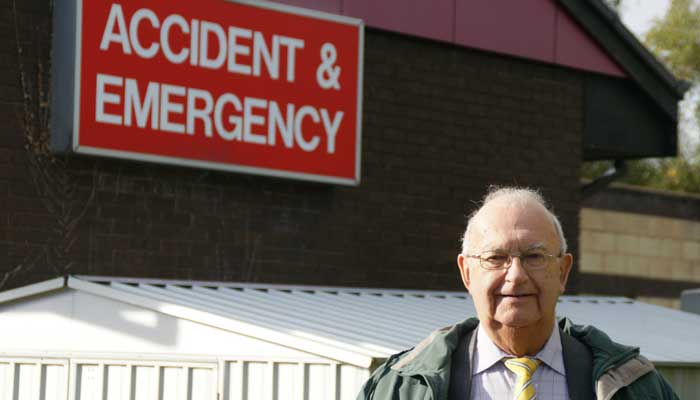 The Chairman of the North Devon Council Scrutiny Committee Lib Dem Brian Greenslade told colleagues at last week’s meeting that he was still worried at the safety of acute health services at the NDDH following questions he had posed at the DCC Health Scrutiny Meeting at County Hall on 13th September. Exchanges can be seen on the DCC webcast site.

He said “that at the Health Scrutiny Committee I questioned the CCG representative about how they were going to reconcile the recent commitment to keep A & E, maternity and stroke services functioning at the NDDH while they were being pressed by the NHS to cut spending on services.

The CCG representative accepted that there was an issue and that other acute services at the NDDH may well be affected in order to square the circle. I also now understand that the Single Transformation Plan, given the thumbs down by both Devon and North Devon District Councillors, is now effectively binned and is being replaced by some form of partnership agreement? These changes do not appear to have found their way into the public arena and I am pressing for this to come before the Health Scrutiny Committee for consideration. My fear is that the “deck chairs” are being rearranged on the deck without proper public scrutiny being carried out!”.

Cllr Greenslade has also written to the Chief Executive of the NDHCT Alison Diamond about reports he is receiving about delays to CT scans at the NDDH which is holding up treatment for patients, such as those with suspected cancer issues, asking for information, should this be the case, as to whether such delays are being caused by lack of financial and human resources or equipment problems?

He added “this is worrying especially for any patients affected and needs answering promptly! If it is down to money then the fears I have just articulated about the threat of NHS budget cuts to other services at the NDDH may already be materialising!”.