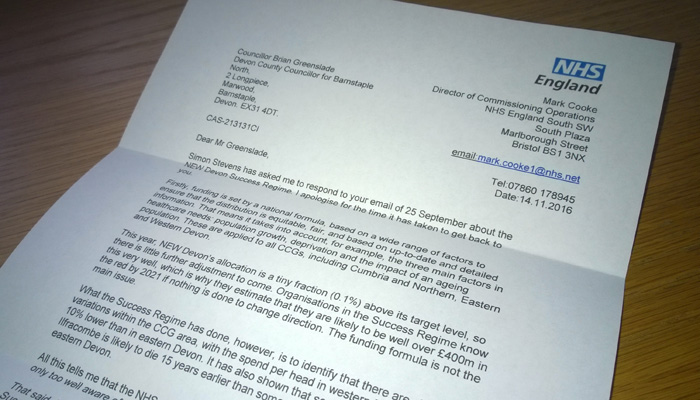 Simon Stevens has asked me to respond to your email of 25 September about the NEW Devon Success Regime. I apologise for the time it has taken to get back to you.

Firstly, funding is set by a national formula, based on a wide range of factors to ensure that the distribution is equitable, fair, and based on up-to-date and detailed information. That means it takes into account, for example, the three main factors in healthcare needs: population growth, deprivation and the impact of an ageing population. These are applied to all CCGs, including Cumbria and Northern, Eastern and Western Devon.

This year, NEW Devon's allocation is a tiny fraction (0.1%) above its target level, so there is little further adjustment to come. Organisations in the Success Regime know this very well, which is why they estimate that they are likely to be well over £400m in the red by 2021 if nothing is done to change direction. The funding formula is not the main issue.

All this tells me that the NHS organisations and local authorities in NEW Devon are only too well aware of the scale of the challenges they face.

That said, I am hugely encouraged by the close working arrangements that the Success Regime has been able to generate in the past year and a half. Organisations recognise that they cannot find solutions individually, but only by working together. The appointment of Angela Pedder to lead work has been a further important step, especially given her parallel role with the Sustainability and Transformation Plan for wider Devon.

These processes will now need to bear fruit, in the shape of proposals for genuine change at a strategic level. These will then be subject to extensive engagement with local communities, which I hope will generate a mature debate around priorities and how we all make the health and social care system work as well as possible for everyone, within the money available.

This will not be easy, but without transformational change we will have a local system that is unable to live within its means. Then we would face a scenario in which short-term cuts might be needed simply to balance the books, rather than as part of a strategic programme to improve the system.

Public consultation is already under way on community services in eastern Devon, as a result of work by the Success Regime. This will lead on to engagement with local communities on the final STP later in the year and then potentially to further public consultation in 2017.

As a result, any potential changes affecting northern Devon - or Plymouth, Torbay and Exeter, for that matter - will be fully discussed in the public arena before any decisions are made. Discussions will be on the basis of principles and detail, rather than a leaked version of an early draft, with a full opportunity to debate issues of safety, quality and access. And the decisions will be taken locally, not by NHS England. NHS England is looking at the funding allocation for remote locations and this may well play into the future picture.

I note your comment about North Devon Hospital acute services; this will be a feature of the work of the CCG’s Acute Services Review and detail on this will be coming soon. Your MP, Peter Heaton-Jones is invited to have regular updates and will share any important information with you.

In terms of Dame Ruth Carnall's appointment, this was carried out formally and fairly. I have been impressed by the work that both she and Carnall Farrar have led, helping to identify the real issues to be tackled by local organisations. These are outlined in the Case for Change.

Responding to your question, the cost of the Success Regime to date is £2,702,063.55 which covers the period 1 April 2016 – September 2016. The appointments of both Angela Pedder and Andy Robinson have not led to any substantial pay rises; Andy Robinson had received a £5k increase in his salary range to reflect the size and complexity of the new role, whilst Angela Pedder remains on the same salary as in her previous role at the Royal Devon & Exeter. Further information on remuneration can be accessed directly from the CCG as part of the annual accounts process.

Overall therefore, it is clear to me that the Success Regime and the STP are essential in shaping proposals for strategic change on the scale that is necessary. Piecemeal adaptations are not adequate in the face of the workload and financial pressures on the system.

I hope this response has been helpful. Please do not hesitate to contact me if you wish to discuss further any of your concerns.