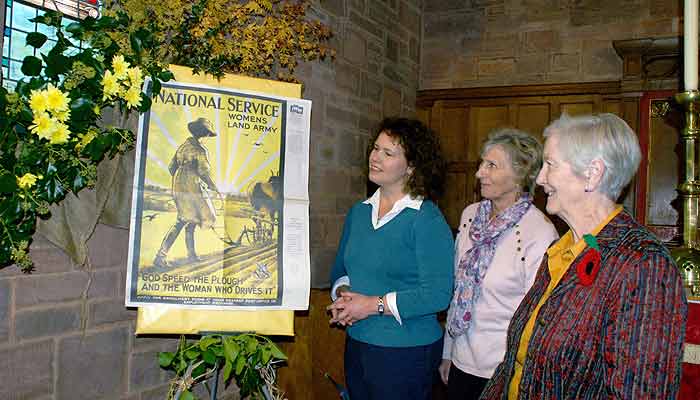 Kirsten Johnson, the first woman to be selected by the Liberal Democrats to represent North Devon in Westminster, visited St. Sabinus’ Church in Woolacombe as part of Remembrance Week. She spent time talking with many of the flower arrangers and to one of the organisers of the Flower Festival, Mary Lethbridge.

She particularly enjoyed the flowers, “God Speed the Plough” which had been designed to honour the memory of the Women’s Land Army and their vital war work in North Devon.

Kirsten says, “As the daughter- and grand-daughter-in-law of farmers from Landkey in North Devon, I am acutely aware of the role that farming has always played in the lives of North Devonians. The work done by The Women’s Land Army in both wars meant that, whilst our troops were away fighting, these hard working and brave women toiled in the fields to make sure that the nation could be fed. This was key to Homeland morale, as well as being an enormous, practical part of the war effort.

In this year we are celebrating the centenary of the end of the First World War, as well as the centenary of when some women got the vote for the first time, I cannot think of a more fitting example than the Women’s Land Army of the debt we owe to all those women who helped achieve both.”