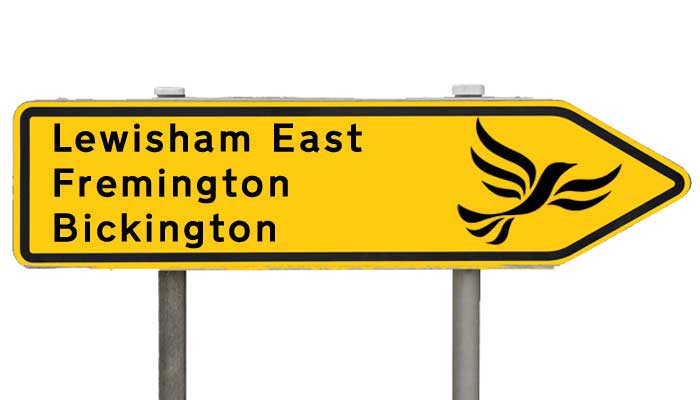 "Well done to Lucy Salek and the team in Lewisham East for a fantastic by-election result! The Lib Dem vote share went up by 19%, pushing the Tories well into third place.

This result can inspire us in our efforts to win the Fremington District Council seat and Bickington Parish Council ward in the June 28th by-elections here in North Devon.

Everyone has a role to play – those who deliver leaflets, people who make phone calls, donors who fund the campaign and activists who knock on doors to canvass voters. Lewisham East has proven that a team effort works, and every little bit helps. Do join in with other North Devon supporters and members in winning these District and Parish Council seats.

"Liberal Democrat Leader Vince Cable said: “Lucy Salek and the Liberal Democrats have seen former Labour and Conservative voters switching support and rallying behind our campaign. We have focused on the issues that matter to the community - and will continue to do so.”

In Lewisham, there was the biggest swing from Labour since the 2004 election in Hartlepool. Here in North Devon, we are hoping to get Labour voters behind us to win back this Parliamentary seat. The swing in Lewisham East, a Labour stronghold, has shown that voters will come to us from Labour because of our policies. We have a lot to offer Labour supporters. And in our case, a Labour vote in North Devon in a general election will only help elect a Conservative MP. We must let Labour voters know we are the only option and they need to vote Lib Dem to keep out the Tories.

Paddy Ashdown said recently, “By-elections might not be able to change the Government, but shock results can change politics and change Britain."

Let’s get a shock result on June 28th, so that we can change local politics and further lay the groundwork for taking back North Devon."