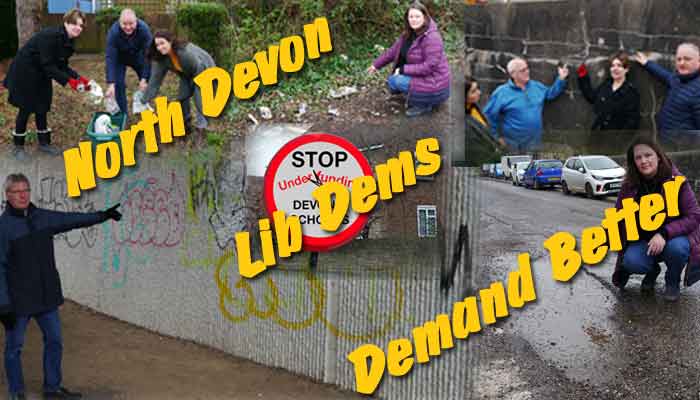 We are launching our “Demand Better” campaign with a petition. Please read on and sign below:

Parish and Town councillors all over North Devon have been out in force this year – cleaning up parks, maintaining road verges and helping local charities. They are literally picking up the pieces after years of cutbacks in government funding.

In Bishops Tawton, the local parish Tidy Up Team meets once a month to clean up the road verges, clear drains and keep the village looking great.

In Swimbridge the Green Team looks after the villages open spaces.

In South Molton, the Town Council now looks after paving slabs, weeding and grass cutting - jobs that used to be done by Devon County.

Schools throughout North Devon receive on average £300 less a year per pupil.

In the recent Budget, the Government found £18 million for roads across the country. This is a drop in the ocean – some roads in the rural parts of North Devon are unusable.

Public services have also suffered. Local Lib Dems have supported the Save Our Hospital Campaign and we believe NDDH needs to offer more services, not less.

Local Parish and Town Councils, run by volunteers, have ended up picking up the pieces of the disastrous Tory policy of austerity. PPC Kirsten Johnson says, “This is simply not good enough. As Liberal Democrats in North Devon, we are fighting for fairer funding because North Devon deserves better. Last year we managed to stop North Devon Council from slashing funds to parishes by 50%. We really need the public’s support if we are to avoid cuts to local services for 2019. Please sign our petition  below or pop into the Lib Dem Office, 1st Floor, 9 Cross Street, Barnstaple, EX31 1BA, to sign it in person.”

By signing our petition you agree that you support North Devon Lib Dems campaign for fairer funding for local services.

As we come out of lockdown, your local Lib Dem councillors would like to hear from you