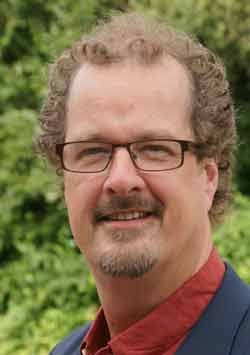 Kevin is a practising Architect, runs an Art Gallery in Chulmleigh and an online business selling Swedish linseed oil paint. His interests dovetail with his passion for shaping a sustainably built environment deriving from his architectural studies specialising in ‘ecological design’ at Kingston and South Bank Universities.

He was educated in the UK and has lived and worked in south-west London as well as overseas in East Africa and France before moving back to care for family in Chulmleigh in 2012. He enjoys many sporting activities, has been an active member of Chulmleigh Cricket Club and is the club secretary and lead coach for Chulmleigh Table Tennis Club. He initiated the ‘table tennis tables in schools programme’ and says “this is all part of encouraging an active lifestyle and engaging children in enjoying a sport.”

Kevin is a family man with three children, all attended Chulmleigh Secondary School and his youngest benefited from four years at Burrington Primary School. Kevin passionately supported the campaign to prevent its closure, which, although unsuccessful, displayed the amazing community spirit that exists.

“I believe in self-reliance, that small is beautiful, working hard, doing one good deed every day and that the best days are ahead of us … it is our responsibility to make sure they are.”

An active member of the community he was part of the team fighting against the scope of development by Devonshire Homes at Ladywell Meadows. He has advised and helped the Parish Council on issues and is working to achieve ‘transparency and best value’ for the disposal of the ‘bramble patch’. He engages with local initiatives including the Devon Air-Ambulance Response Team and the exciting new proposals at the Sports Pavilion.

“I will continue to campaign on issues I feel passionately about, that are supported by the community, and where I believe my input is welcome and beneficial. Although I am based in the middle of Town, much of our community is rural, which should not prejudice access to public services or indeed cell-phone coverage and good internet access.”