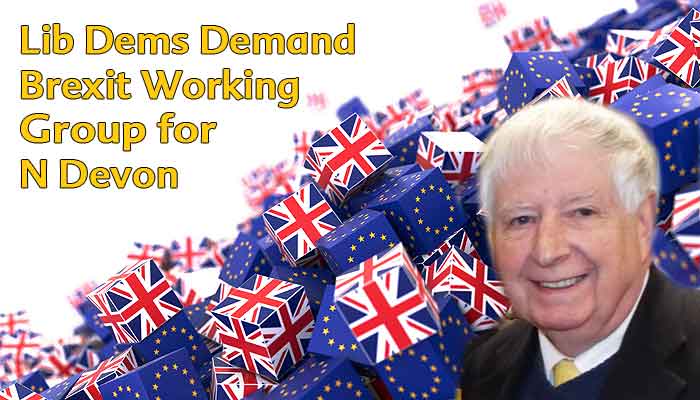 In the wake of Theresa May’s dismissal by EU Leaders in Salzburg (20th September), Leader of the North Devon Liberal Democrat Group, Cllr David Worden (South Molton), seconded by Cllr Caroline Leaver (Newport) is to submit an urgent motion to Full Council on 26th form a Cross Party Group to do so.

Cllr David Worden says;” We live in one of the most deprived areas of the South West. There are hardly any services which have not been hit by Conservative austerity cuts. We know that these cuts have been driven by Conservative ideology, rather than necessity. We simply cannot sit back and let the disastrous No Deal scenario, which seems ever likely, to be upon us, unprepared. This proposal is pragmatic and in the best interests of everybody in our North Devon community”.

Dr Kirsten Johnson, Liberal Democrat PPC for North Devon adds; "Whether people voted Remain or Leave, the chaotic handling of Brexit negotiations by this Conservative Government, is a matter of grave concern. The GDP of the South West was already set to fall by 2%, and that was before a No Deal Brexit. Defra’s own figures show that up to 25% of farms are set to close – North Devon’s agricultural industry is under unprecedented threat. I am pleased that Liberal Democrats on NDC are taking the lead on this matter.”

The notice of motion reads:

“The impact of Brexit (hard or soft) will affect all North Devon residents. This Council believes that with Brexit fast approaching, it is both sensible and realistic that the potential risks and impact of Brexit on North Devon - good and bad, short term and long term - are fully understood as far as is possible and aired in public together with detailed discussion on how these impacts can be mitigated. To achieve this, this Council undertakes to organize and coordinate a public conference/symposium before Christmas in which North Devon’s experts and leaders in business, farming, tourism, education, health and social services and other areas are invited to participate, together with elected representatives at all levels. This council is uniquely placed to lead this initiative by immediately setting up a Cross Party Working Group. The findings and conclusions of the symposium would be presented as a report to full Council and other authorities. Furthermore we request that consideration be given to how this Council can assist businesses etc. before and during the transition period.”