North Devon Liberal Democrats have elected their Parliamentary Candidate for the forthcoming 2019 General Election.  At a packed meeting on Friday 1st November members of the local party selected Alex White as the person who will take the seat back from the Tories and build a brighter future for the people of North Devon.

Lib Dems are backing Alex because he's not afraid to get stuck into challenging issues facing the community.

Alex worked on UNICEF anti-aids campaign in Jamaica, is a professionally qualified LTA Tennis Coach, and has volunteered with both the Exeter Deaf School and Children’s Rights Alliance England.

Whether tackling difficult legal cases, campaigning to protect the environment, or speaking up for children and families, we believe he’s a born community campaigner - enthusiastic to tackle the mess the Conservatives keep making. 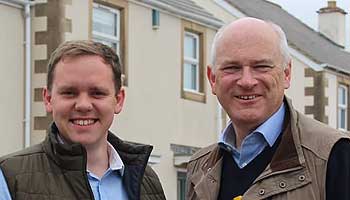 "…I'm backing Alex because he's a future community champion – he's a tireless campaigner for justice, not afraid to fight the corner of local people, however difficult it can be.

I know that he'll stand up for North Devon when it counts.” says Sir NIck