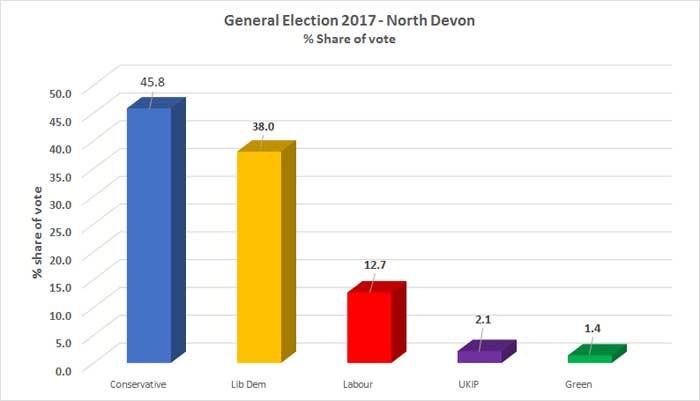 The report, Journal 15th June, "Labour Share of the vote hits new heights" is not factual.

Since the North Devon constituency was created in 1950 Labour have polled greater vote shares in general elections in 1950, 1951, 1955, 1966, Oct 1974 than the 12.7% they got on June 8th. Incidentally at the one election Labour came second in North Devon the Conservatives enjoyed their largest majority ever.

On June 8th Nick Harvey achieved his greatest increase in vote share, plus 8.6%, at any one election polling three times as many votes as Labour did. By the way the Labour vote share in North Devon on June 8th was amongst the lowest Labour shares for the 23 constituencies in the far south west with 19 out of the 23 Labour candidates polling larger shares than in North Devon.

The combined vote for the Conservatives and Lib Dems in North Devon on June 8th was 83.8% confirming yet again that the election battle in North Devon remains a two horse race.  Voting Labour in North Devon merely helps the Tories as any Labour votes only count in North Devon and can't help Labour elsewhere!